During our last registration process we asked every candidate who applied for a place at  La Cita de los Amigos Winter Edition (16. – 18.12.2016) to answer the following question: “Which is your favorite tango recording?” Song title and orchestra.

Since the start on 1.9.2016 we received around 400 answers, some were blank votes and are marked as NA (no answer) in the results. The participants are spread equally over the 2 genders and are coming from 31 countries of residence, mainly from Central Europe (Belgium, Germany, France, Ukraine, United Kingdom, Portugal, Italy, Slovenia, Luxembourg, Netherlands, Spain, Latvia, Slovenia, Switzerland, Colombia, Finland, Sweden, Denmark, Macedonia, Russia, Serbia, Poland, Slovakia, Croatia, Norway, Lithuania, USA, Ireland, Romania, Austria, Argentina) and have a high level of dance skills.

The outcome is in certain regards quite astonishing. See here the table with the distribution of the favorite orchestras: 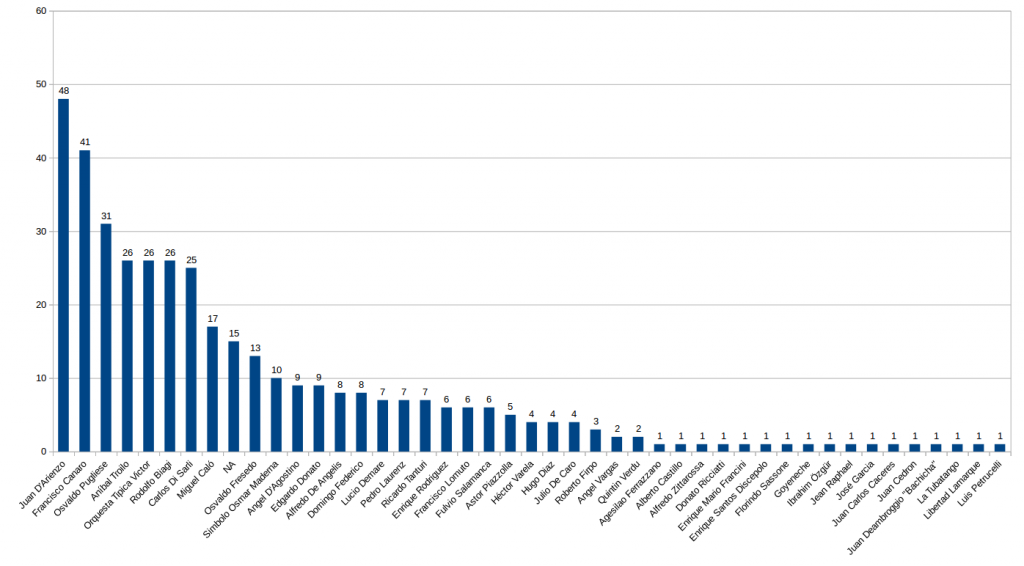 Juan D’Arienzo is with 42 votes on the first place uniting nearly 10% of all votes, followed directly by Francisco Canaro (41) and Osvaldo Pugliese (31). On the 4th place in equal balance: Aníbal Troilo, Orquesta Tipica Victor and Rodolfo Biagi, all received 26 votes.  On the 5th place we find Carlos Di Sarli (25) and on the 6th place Miguel Caló (17). The way the question was formulated induces that we didn’t necessarily want to know the most loved orchestra but the one which performed the most loved tango recording. It is nevertheless interesting that the column orchestras got a little bit stretched and includes unexpected choices like Francisco Canaro, OTV and Rodolfo Biagi, that Carlos Di Sarli arrives at the edge of the Big Four and that Francisco Canaro got ahead of Osvaldo Pugliese. And by the way some participants (30) answered just with an orchestra name and didn’t mention any title or a singer. The NA threshold (15) is quite low compared to the next tables (favorite singer and song). This seems to be quite natural as everybody can at least with ease name an orchestra.

Let’s see now the favorite song titles for which the participants voted and from which we mainly derived the previous diagram: 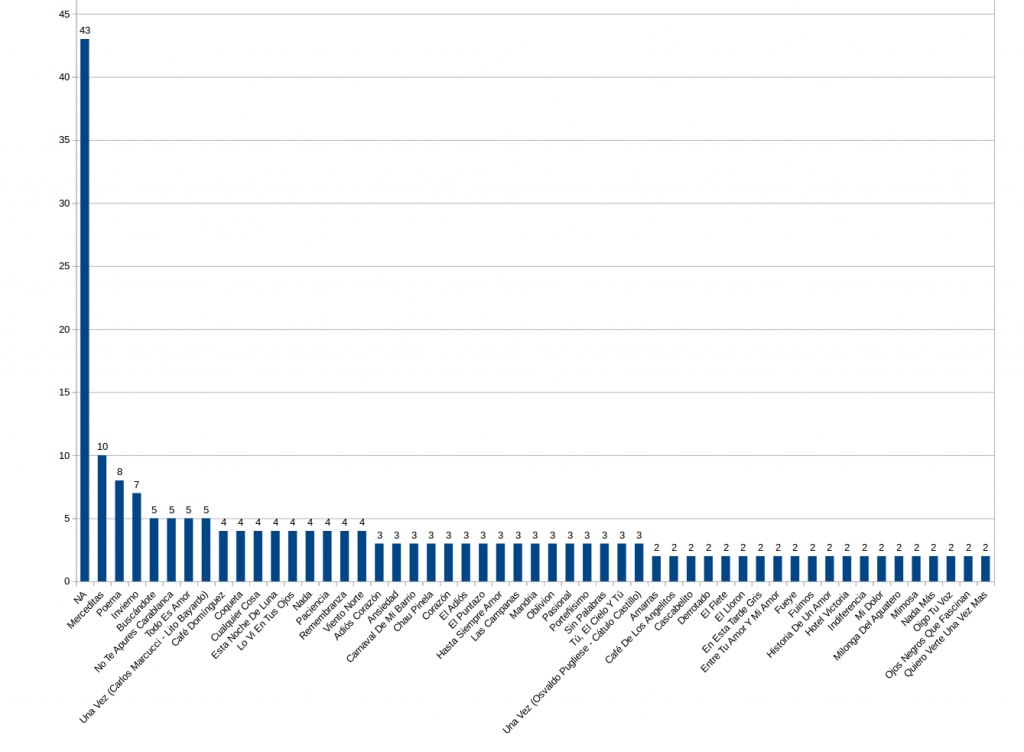 First of all there is an extremely high figure of blank votes (43 NA) because it is always difficult to remember a title compared to the name of an orchestra. In the beginning we were thinking that we could make a nice TOP-10 chart but this isn’t the case. At most we can make a TOP-4 containing 7 songs. See here for the favorite tangos of the moment:

Even if there are 7 highly identifiable hits, the figure shows that the taste of the participants is very much spread over a large variety of different songs which got nearly all the same score in the scope between 1-4 votes. In other words the 7 hits are voted by only 45 participants. Taking 43 blank votes into account, 310 others add up for a diverse and individual favorite song choice.

Let’s check out the singer now. This question wasn’t asked explicitly but it can be deduced from the collected data: 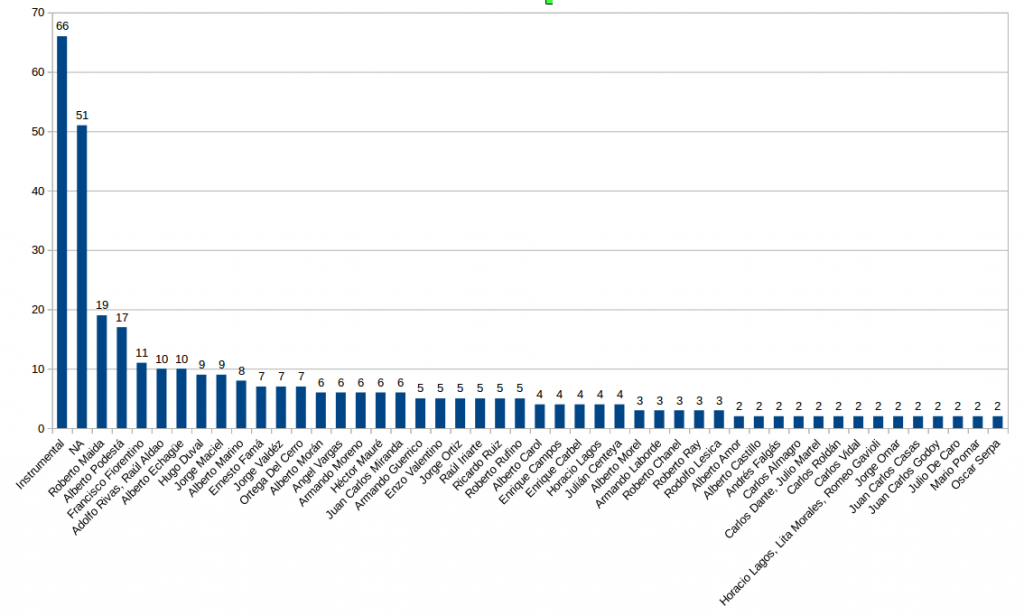 The favorite singer is no singer, or rather an instrumental tango (66). On the first singer place we find Roberto Maida (19), the second place goes to Alberto Podestá (17) and on the third place sits Francisco Fiorentino (11). On the fourth place we can see the two singers of the hit of the year, Merceditas, Adolfo Rivas and Raúl Aldao together with Alberto Echagüe (10). 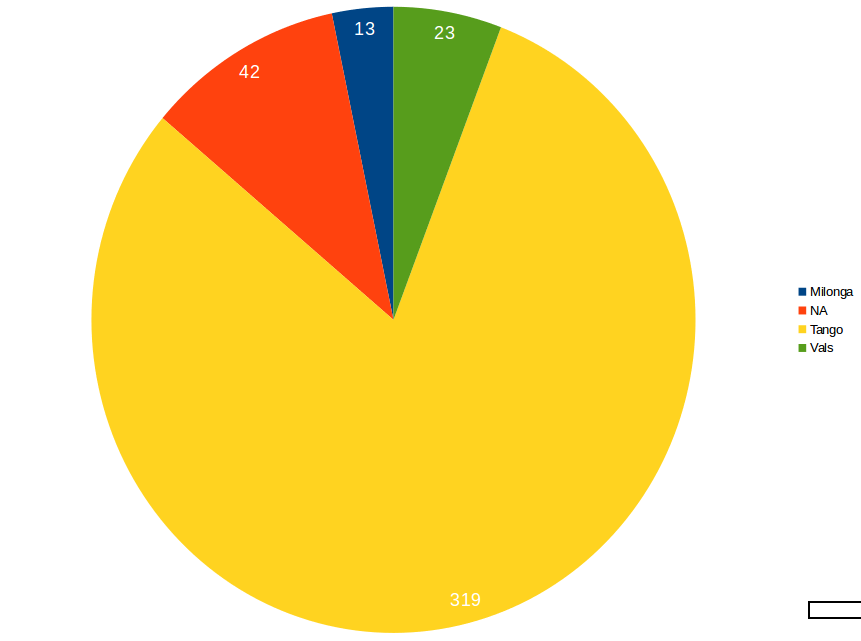 Ah, and last but not least, La canción de los pescadores de perlas recorded by Florindo Sassone in 1968, finally received 2 votes, one from a late registration. It therefore should be in the range of 2 votes in the favorite song table.